Hockey Fights is an entertainment site with no direct affiliation to the National Hockey League, its teams, or NHLPA 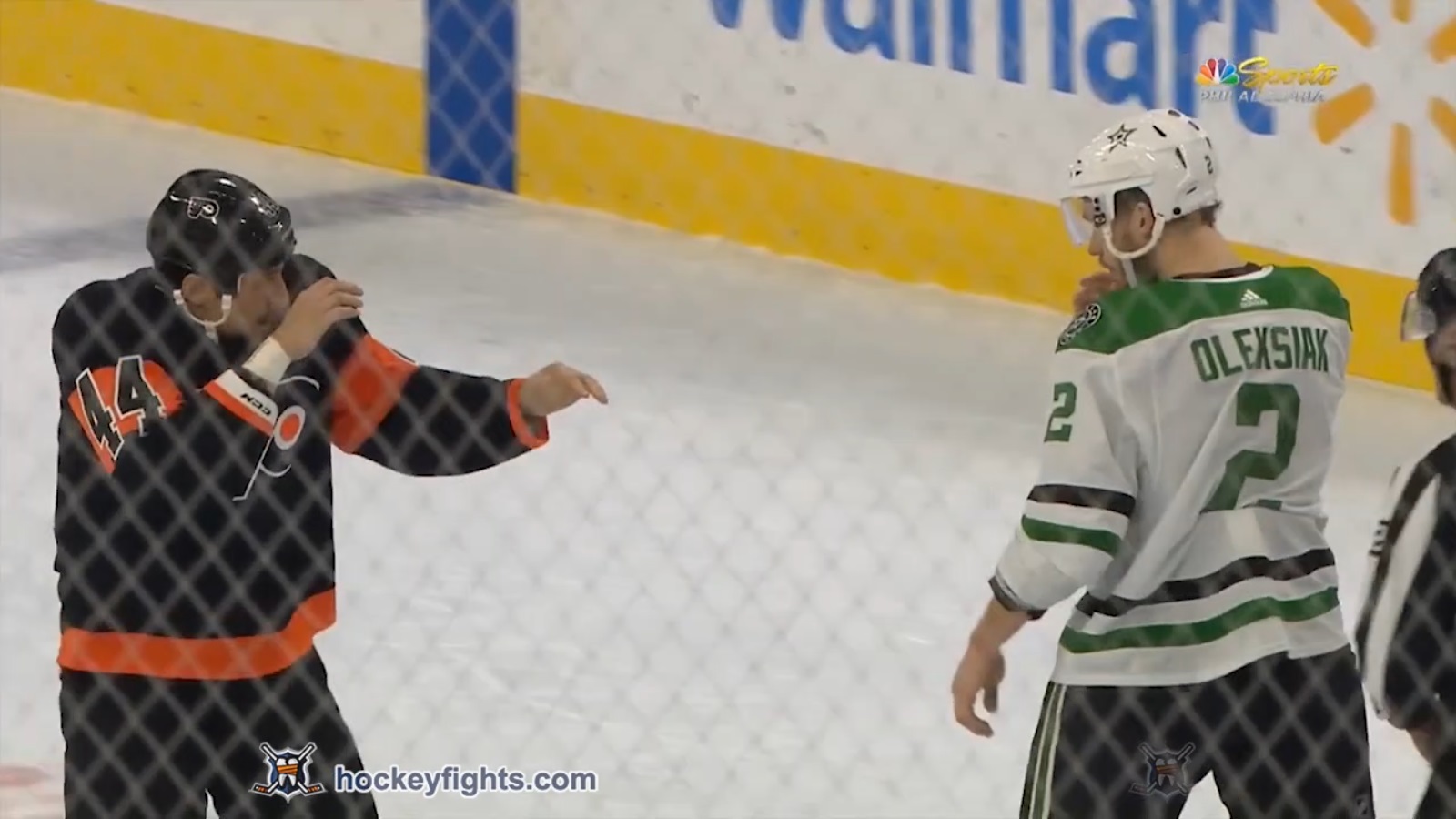 Tale of the Tape according to our friends at Puckpedia.com:

Jamie Oleksiak of the Dallas Stars

Chris Stewart of the Philadelphia Flyers

A fight off the faceoff dot early in a 2-1 game. Chris Stewart having spent all of last year in the UK, he had just signed a contract with the Flyers three games previous. The two square off and glide together from their stances.

Stewart starts it off with a quick left as he goes to grab Jamie Oleksiak. The big Oleksiak then lets his right hands fly throwing about nine punches (landing to varying degrees) in succession before Stewart responds. Stewart throws a couple before they distance themselves a bit and start to rotate. Both then start punching with Stewart landing the better of the flurry. They come in close and Stewart clenches Oleksiak's head and throws off the helmet. They then separate again and Oleksiak begins an exchange of punches before a left from Oleksiak starts the "timber" of both combatants, Stewart on top. The linesmen step in.

For Oleksiak, this was his first fight of the season. His last fight came in the 2018-19 season on December 19th, 2018 against Tom Wilson of the Washington Capitals.

This was the 17th fight for Oleksiak in the NHL

For Stewart, this is his first fight of the season. His last fight came in the 2019-20 preseason on September 21, 2019 against Michael Haley of the New York Rangers.

This was the 63rd fight for Stewart in the NHL. 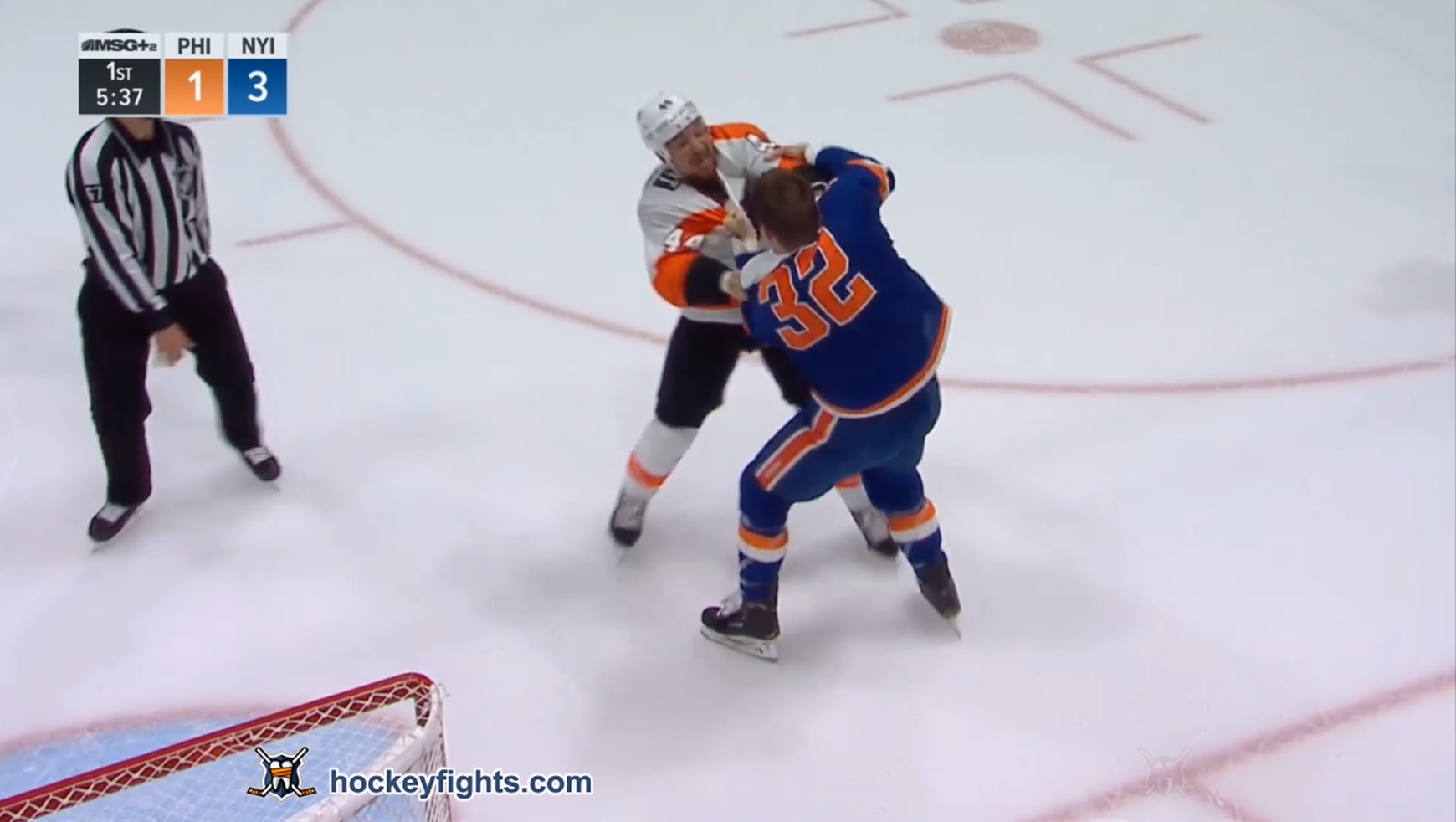 Tale of the Tape according to our friends at Puckpedia.com:

Chris Stewart of the Philadelphia Flyers

After seeing what appeared to be a vicious check from behind in real time, you understand Chris Stewart wanting to have a little piece of Cole Bardreau. But for with Ross Johnston on the ice it was only a matter of time for the two to meet up and have it out, with already sitting in the box earlier in the game for roughing. Johnston comes into the melee and grabs Stewart (who seemed to be looking for Ross) and it's go time

They hug up immediately and separate from the pack of players, and then the gloves come off over the top. Stewart fires off a right first before Johnston comes back with a couple of his own. Johnston then tries to go under Stewart's left arm as they skate away from the boards. Both guys have pretty good control of the others arms and so the struggle is real in this one. Not many big landings before they go down to the ice and the linesmen pile on.

For Stewart, this was his second fight of the season. His last fight came on October 19th, 2019 against Jamie Oleksiak of the Dallas Stars.

This was the 64th fight for Stewart in the NHL

For Johnston this is his second fight of the season. His last fight came on October 12th, 2019 against Josh Brown of the Florida Panthers.

This was the 9th fight for Johnston in the NHL. 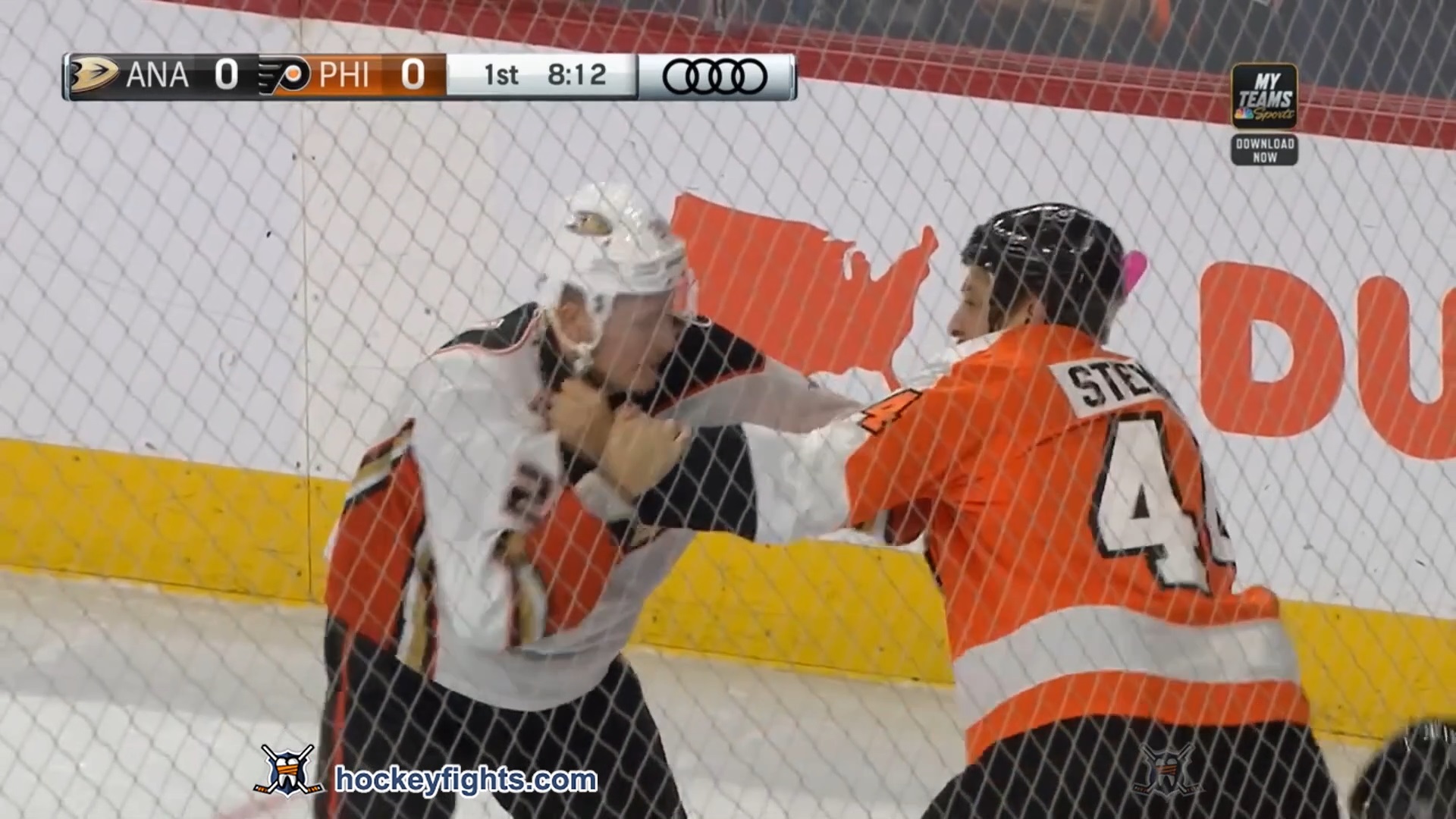 Please enter your username or email.